How Do Exoskeletons Work?

How Do Exoskeletons Work?

Exoskeletons, sometimes called exosuits, should be familiar in concept to most people thanks to their popularity in science fiction. These are essentially wearable robots that enhance the abilities of the person wearing them. While they won’t give people anything close to superpowers like they do in the movies, they can help improve strength, reduce fatigue, prevent injuries, and more. Currently, the use of exoskeletons has many applications for improving human performance in industries like the military, construction, and physical therapy.

Among the first exoskeletons on the market was the HULC model, created by the world leader in exosuit technology, Ekso Bionics. This was a hydraulics powered suit made for military use that offered leg support and acted as a backpack of sorts so that human operators could carry heavy objects over greater distances and at higher speeds. While the suit was promising in concept, it did restrict some movements and could result in additional stress on muscles. Today, there are many different, and much improved, exoskeleton models. Here are some of the best examples and how they work. 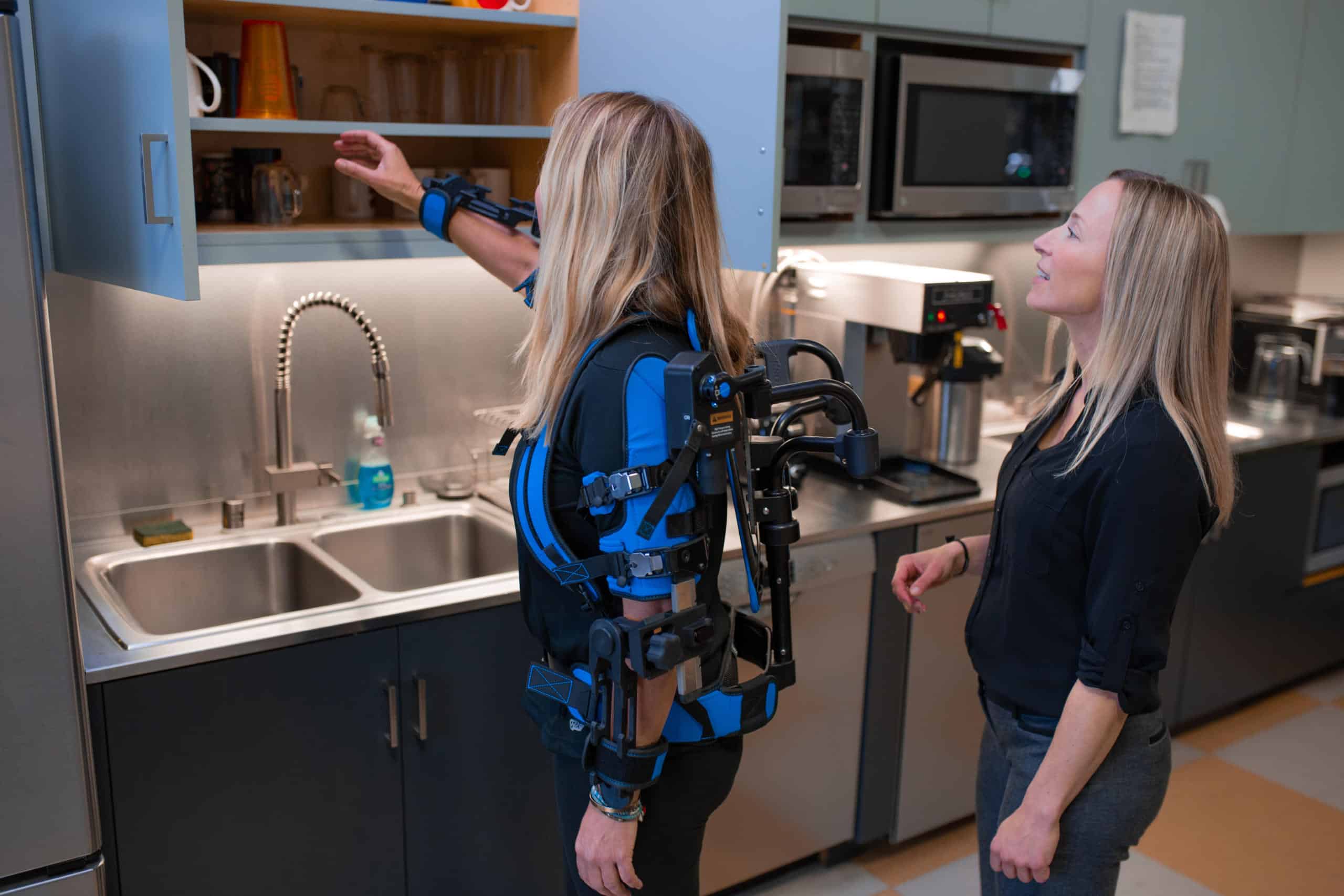 The industrial exoskeleton sector is generally the most active today since wearables for the support of upper extremities are becoming so common in the construction industry as well as manufacturing. The main goal for industrial exoskeletons isn’t to give workers “super strength” or anything of that sort but rather to prevent workplace injuries. Strain due to overexertion and injuries caused by repetitive tasks are some of the most common culprits behind lost productivity in industrial settings. Of course, physical stress caused by worker fatigue also leads to lost time and makes injuries more likely to occur. Industrial exoskeletons seek to decrease fatigue, support muscle activity, support joints, and reduce discomfort while performing repetitive overhead work to increase occupational safety.

Upper bodysuits are typically made of a metal frame that wraps around the user’s chest. A metal rod positioned at the spine branches out into supports for the shoulders, arms, and hands as well. These suits are generally not powered, meaning that they provide support using pulleys, a spring balancer, weights to counterbalance the workload, or other purely mechanical means. These systems generally take the weight off the user’s shoulders and arms and transfer it to their cores so that they have increased endurance during overhead tasks and other demanding work. Since these wearables aren’t powered and typically just provide support without the wearer having to interact much with them, each model is sometimes called a passive exoskeleton.

A great example is the EVO exoskeleton created by Ekso Bionics. This is an evolution of Ekso’s vest exoskeleton technology used by Ford and other industry leaders. This model was created using the feedback from business leaders and industrial workers to address the challenges of workers as well as possible and to prevent workplace injuries and strain. This model also allows for the full flexibility of the shoulders and waist to provide the best comfort on the market.

Another great industrial application of exoskeletons is the zero gravity skeletal arm. This is a device used to lift and hold heavy tools of up to 42 lbs. This industrial robot, EksoZeroG, is great for holding large power tools like grinders, drills, and many more. The tool balancer can be mounted almost anywhere in under a minute, and it’s primarily used for aerial jobs and on scaffolding. The zero gravity tool holder can also, as the name implies, let workers move tools around as if they were weightless.

The Ekso Bionics Aerial System eliminates the dangers of dropping heavy tools from great heights at construction sites while also eliminating dangerous physical stress and muscle fatigue. It’s a simple spring-loaded arm that’s able to transfer the weight of payloads to its base and then to the ground. As a purely mechanical solution, there’s no need to worry about power or batteries.

Lower body exosuits are generally used for locomotive assistance and gait training and are often used in physical therapy to help patients relearn how to walk or to improve their overall walking ability. One of the most well-known applications of these exoskeletons is their use for patients with paraplegia who suffered from a spinal cord injury. Powered exoskeletons can help patients carry their own weight and start walking again. Motor support can range from full assistance to patient-initiated movement or even with the addition of resistance depending on their needs, and medical professionals receive constant feedback from the devices.

These tools are excellent for gait training patients who have experienced strokes and have difficulty maintaining their balance. Patients who experience “pushing syndrome,” a disorder that leads to an imbalance in posture can use these devices to walk with a weight shifting mode that promotes neuroplasticity and can help correct the condition. Lower body devices also help to reduce patient discomfort and fatigue, so medical professionals are able to make the most of each session.

These are just a few of the modern applications of exoskeleton technology. There’s little doubt that, as technology progresses, human abilities will be enhanced even further, perhaps even bringing ideas from science fiction into reality. To learn more about the newest exosuit technology and how they can help your application, reach out to the Ekso Bionics team today.