Skip to content
Outcomes of Using EksoNR in Inpatient Rehab

[The following is condensed from the full webinar of Dr. Crissy Voigtmann and Dr. CJ Curran.]

The Institute For Advanced Rehabilitation (IFR, Orlando Health) is a CARF accredited inpatient and outpatient rehab unit partnered with Ekso Bionics in 2019. With the utilization of EksoNR (the first FDA cleared exoskeleton) in the rehabilitation of patients, they were able to narrow down the typical patient profile and measure their progression via outcomes from using EksoNR.

The following data represents the “average” scoring of all of their 310 stroke patients. It is provided so that anyone may look over and compare this data with those they tended to put into the exoskeleton. When patients are referred to as going into the exoskeleton, please note that it means at the exoskeleton’s maximum assistance level.

Now, their outcome measures. The postural assessment scale for stroke (PASS) is a stroke specific outcome measure that is determined by movement of the patient: they’re sitting, they’re rolling in bed, they’re standing, and then picking up something off the floor, as well as single limb stance. Typically that score is out of 36. Their average PASS score on admission for all patients with stroke was a 20.7, which indicates significant deficit. 12.4 is the average PASS score for their stroke patients going into Ekso, so they are even more impaired than the average patient they saw on the floor.

The Berg is out of 56 with the benchmark being 45; you can see the patients come in a lot lower level than that at 16.6. The Berg for the exoskeleton candidates is 4.9, meaning they can sit and maybe be transferred by one person – that’s generally a five out of 56 on the Berg. Some patients who get into the exoskeleton can sit independently and some cannot; again, as you can see reflected in the data, their gait is almost not a gait. It is very, very slow, 0.04 meters per second, if they are even ambulatory.

Average Care Score for Mobility on Admission for all CVA:

Average Outcome Measure Performance on day of evaluation for all CVA

Gait: Total (1) for all ambulation

How often is the exoskeleton used on the floor?

The average number of total steps taken per patient during their stay is 1,354 with an up and walking total of at least 11 minutes per session, but the average uptime is more than half the session. That means more than half of the session is where the patient is actually standing and in a weight bearing position. They may be working on pre-gait activities. They may be working on just standing tolerance and co-treating with OT or speech. So they do utilize it longer than that 11 minutes, but that’s active walking time.

What were the deciding factors in having Ekso a part of the program at Orlando Health?

As Dr. Crissy Voigtmann and Dr. CJ Curran were in the decision-making process of having Ekso become a part of their program, they were asking themselves: “Are we doing enough? Are we providing these patients with enough repetitions at a high enough intensity level to elicit the neural change that needs to happen during this short length of stay that we have?”

In general, the answer to the questions they asked was no. They ultimately decided there was not an exact dosage that has been established for intensity or for repetition, but there was a growing body of evidence that demonstrates for gait in particular; that stepping practice needs to be in the thousands a day for optimal improvement.

Not only were they not utilizing the active time with these folks to provide high-intensity therapy that is necessary for neural training, but even during the passive time, they realized they were not providing the necessary environment, whether it be with engagement or stimulation that is necessary for improvement as well.

They determined the best solution was integrating Ekso into their program. This was the bridge. This bridged the gap between that dilemma and that solution. For them, Ekso allowed them to accomplish those goals on day one and early, especially for their folks who are significantly impaired, the ones with a lot of deficits. These were folks, in their experience, that are really difficult to gait train. These are the people that unfortunately tend to fall through the cracks and would get low level therapy or low intensity therapy otherwise.

A Case Study with EksoNR

Almost 60% of the patients are stroke patients. They found that the EksoNR does such a good job, that typically they’re ambulatory at the end of their rehabilitation, and they move on to their outpatient clinic. An incomplete spinal cord would be their second highest diagnosis in terms of volume.

Take into consideration the progress of one of their patients, Sarah. She is a 62 year old female. She had multiple ischemic strokes in her right hemisphere. She also presented with pusher syndrome. With pusher syndrome, the difficulties that arise in therapy are because of misunderstanding of midline orientation: they are persistently laterally leaning, and/or they’re pushing themselves over onto their weak side. This is very challenging to treat because they are going towards a limb that is hemiperetic and does not support their body. Just getting that patient to take a step is difficult because their weight shifting is so impaired.

Sarah is also a tall and large woman, which makes it even harder for a therapist to facilitate gait. She had left neglect. Her admission was very early after her stroke, just five days post-stroke, so all of the therapy was new for her. In addition to her challenges, she was also a braille user.

Her admitting outcome measure scores PASSwas a 12 out of 36, and she was non-ambulatory, requiring maximal assistance for her bed mobility and her transfers, while being dependent for gait. They were able to get her in the Ekso three times. She didn’t take a ton of steps. They were a little bit limited in her length of stay and her time, but these steps were very effective and these sessions were very effective. They allowed the exoskeleton to facilitate those steps. When they put on the Ekso, it was just one therapist and the tech or an aide. They were able to spend more time standing doing pre-gait. The clinicians were treating that pusher syndrome by having her shift her weight onto her limb more. They recall that was a significant moment for this patient.

The data for her outcome scores are below so that you can compare her admission to her discharge:

Max A bed mobility and transfers; dependent for gait

SBA Bed Mobility, SBA for 10 feet of gait and transfers, Min A gait >150 feet and 4 stairs 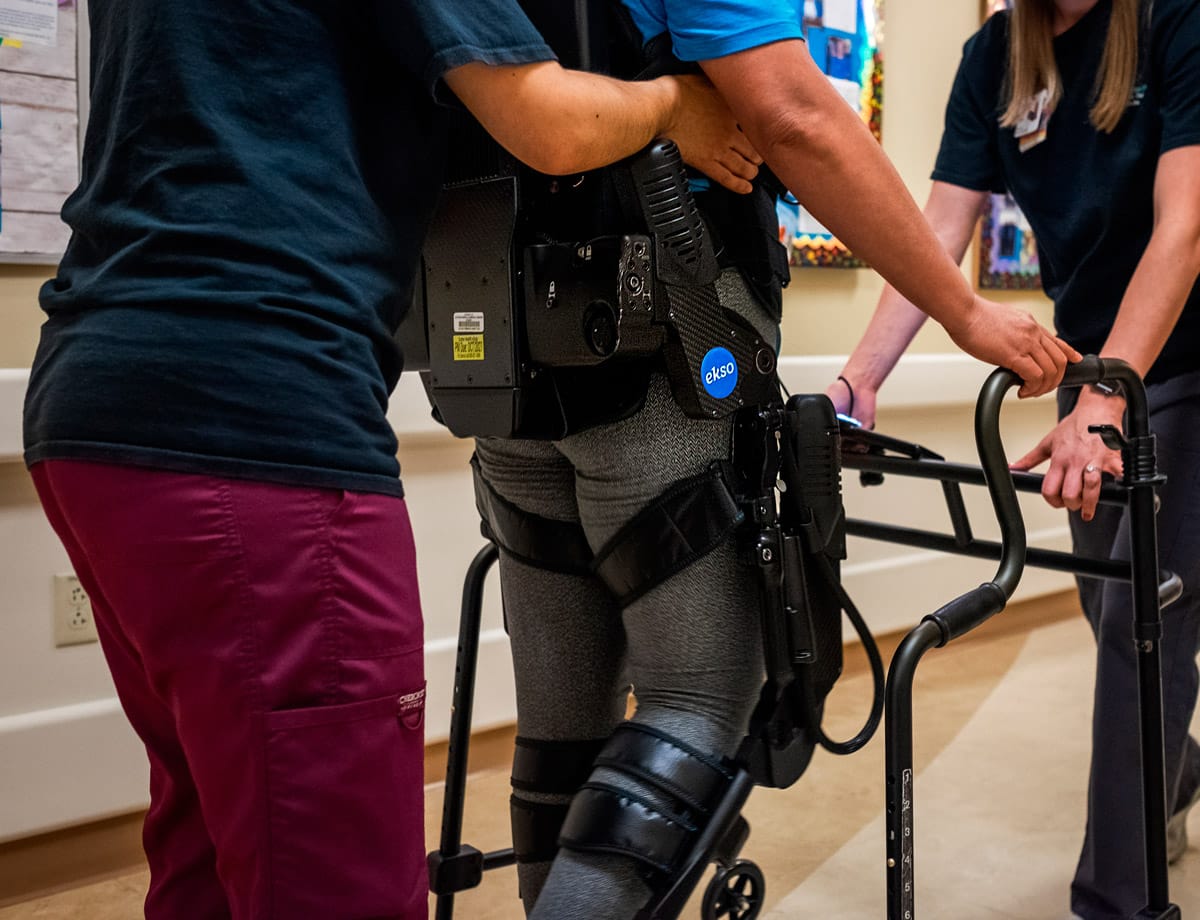 How long does it take to get a patient up and walking in Ekso?

Practice breeds efficiency with the EksoNR. Just like their patients are motor learning, the clinician team also had to motor learn as individuals.

How many patients can get into the Ekso per day or per week?

In their experience, the answer to this fluctuates. It all  depends on the caseload and what census looks like as well as what the diagnoses in that census are made up of. There are days, however, where there could have been three to four Ekso sessions going on in a single day. But there are also times where there’s only one person on the floor that is using it, the doctors recall. They’re taking advantage of the fact that they’re the only person in there, but they noted that it does fluctuate. It could be as limited as one person today, even a couple of days in between sessions to a whole line waiting to get into it.

For more information on EksoNR in Orlando Health, Case Studies, and more, click here for the full Webinar.